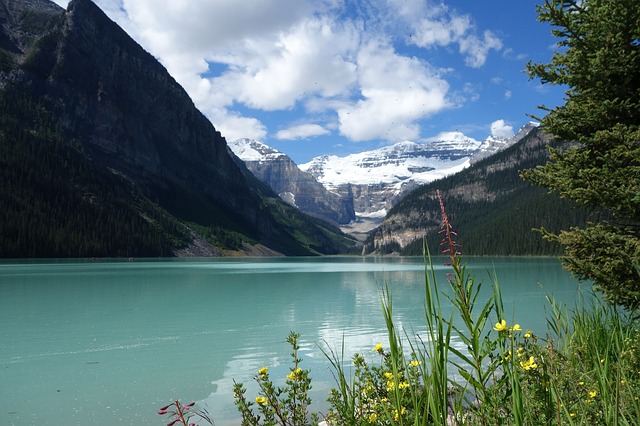 Canada is a country in North America. Its ten provinces and three territories extend from the Atlantic to the Pacific and northward into the Arctic Ocean, covering 9.98 million square kilometres, making it the world’s second-largest country by total area.

The Most Important Places in Canada

If you had plan to visit Canada, you may put the most important places in Canada into your travel list.

Located in western Canada, British Columbia and Alberta in the state, sequence Canadian Rockies Mountain is considered one of the most difficult mountains for climbers and is also home to stunning aesthetics should not be overlooked in the itinerary schedule trip . It is the best choice in summer for lovers of climbing and skiing is an ideal place for visitors in winter.

Canadian Rockies Mountain range is part of the population majestic Rocky Mountains with the highest point is Mount Robson (3,954m). The whole mountain range covers an area of 180,000 km2, including millions of rocky mountains, glaciers, lakes, canyons, waterfalls, caves. The national parks of Banff, Jasper, Yoho and Kootenay Rockies Canadian component has been recognized by UNESCO as world cultural heritage.

Vancouver is interesting destinations across Canada tour. Vancouver Island is a large island in British Columbia, Canada and one of the most important places in Canada. This is one of many places in North America was named after George Vancouver, an officer of the Royal Navy discovered the northwest coast of North Pacific America between 1791 and 1794. Wild beauty and the waves of tranquility by the sea here will fascinated travelers. Vancouver Island is a haven for outdoor activities such as fishing, whale watching, wildlife, golf, visits to orchards.

Vancouver Island was voted the number one destination in North America in terms of the island and is a beautiful island No. 3 in the world. Only the area of 31,285km2 (about 1/10 of the area of Vietnam), but Vancouver Island seems to contain all the natural beauty and clear blue shoreline, mountains, lakes, rivers, waterfalls, caves, primary forest and islands neighboring.

Lake Louise is a lake in Alberta, Canada. Lake Louise is named after Princess Louise Caroline Alberta (1848-1939), the fourth daughter of Queen Victoria. Lake Louise has a unique natural beauty, emerald green water, glacier above the Victoria, around the lake is majestic Rocky Mountains mountain forest, one of the 7 wonders of Canada.

Lake Louise has three attractions, Lake Louise village (The Village), Lake Louise and Lake Louise hotel. Winter visitors come here for skiing, fishing on a frozen lake, or skating. Summer tourists come here on foot (or on horseback) to the mountains, or kayaking or fishing.

Churchill is a small village on the coast of Hudson Bay in Canada. This is ideal for those who want to enjoy nature and animals option. Since there are many polar bears they moved there in the fall so the “polar bear capital of the world” was called.

In this place, you will have the opportunity to watch polar bears in a natural habitat in the frozen tundra. Guests can visit the polar bears by specially designed vehicles. November is the most convenient time to see hundreds of bears in this vast archipelago period.

As a means state solo Atlantic Ocean, New Soctia called paradise on earth with special peninsula and impressive on the map of Canada in general and in particular the world form. Due to geography, topography Nova Scotia mountains, valleys and plains formed by the estuary it has created the ideal eco-tourism.

Come to Nova Scotia, visitors can admire the romantic river luxury resorts and beautiful beaches of the east coast of Canada. To date, Nova Scotia has built for himself a land of tourism with the genre of adventure, exploration, camping, resortHe. ld tourists to visit throughout the year, although it was freezing winter or hot summer …

Angel Falls can be higher and wider than the Victoria Falls, but maybe Niagara remains “crown” is the most famous waterfall in the world.

Niagara Falls, located on the border between the US and Canada, with silver white waterfall during the daytime is a place that attracts many visitors. This is a place made for a scene in the film of Marilyn Monroe, is the choice of many wedding couples or honeymoon vacation. This waterfall is also the choice of many tourists venture passion, you want to conquer ourselves before the power of nature “mother”. If anyone has ever night stay here, you can enjoy stunning views show when night falls, the lamps high pressure system with colorful makeup flame shines in thacb become fanciful.

There is a kind of emotion entertainment help visitors experience in Niagara Falls was traveling between police lines and reach where waterfalls pour down. She yacht called virgins in the Mist (Maid of the Mist). Empty double-decker boat, no cabin, no walls, no seats. Guests are required to wear a wet boat. By the mid sector of mining, the country will launch a blinding dust, strong rocking boat that visitors had to cling to the boat, otherwise it will fall. Boat increasingly come to the foot waterfall, splashing water on the boat as rain. Guests can experience the thrill, but very interesting.

The largest city in Canada, Toronto

Toronto is the largest city in Canada and also the capital of the province of Ontario. Located south of Canada, which extends from the north shore of Lake Ontario to Lake easternmost Great Lake. Toronto is a multicultural city, race, art and is considered one of the safest cities in North America. This city is famous for skyscrapers, the University of Toronto, the bridge team and great band, and high CN Tower in the world.

The city has the most unique places in the world where visitors should not miss in Toronto. That’s CN Tower (TV Tower Toronto), 1,815 feet tall, the tower is the highest in the world alone (twice the Eiffel Tower in France and three times the Washington Monument in the US). Widely regarded as one of the seven wonders of the modern world. Visit the Museum of Ontario one of the largest art museums in North America, more than 24,000 artifacts exhibition will help visitors understand the most important information about the culture and history of Canada America.

Underground PATH quarter was busy shopping street below the city of Toronto, including 27 intersections, 3 bridges, 48 office buildings, six hotels and 1,200 stores. This neighborhood was included in the Guinness Book of Records as the largest underground shopping center in the world.

Bay of Fundy, located between the provinces of New Brunswick and Nova Scotia on Canada’s east coast of North America. Bay of Fundy is famous worldwide because of the highest tides on the planet (16.2 meters or 53 feet). 100 billion tonnes of seawater flow in and out of the Bay of Fundy twice daily – more than the flow of all the rivers of freshwater in the world as a whole. Extreme tides of Fundy create a dynamic and diverse marine ecosystem.

In the Bay of Fundy, while sea level rise will of 2-4 meters in one hour. Guests will have the opportunity to witness an impressive natural phenomenon when a funnel-shaped bay by the receding tide. Now visitors can walk seabed about 3 hours before and after the water receded.

Also, when visiting the Bay of Fundy, guests can choose a form of entertainment little adventure challenge cliff climb as high 46 meters, caving, kayaking, hiking, or enjoy fresh air and beautiful scenery around.

This bay is also an area of international foster critical for migratory birds. You can also admire rare species of whales are in danger at bay.

Located along the romantic St. Lawrence River, Quebec is Canada’s oldest city. Just choose the 400 th birthday in 2008, Quebec is an architectural treasure and is also a living museum that houses historical evidence European colonies in the new era. Currently Quebec has also become an ideal destination for many tourists.

Québec City is famous for the festivities as the Winter Carnival, the New France Festival (Fete de la Nouvelle-France) jazz festival, comedy festival and film festival … splendid Chateau Frontenac (Chateau Frontenac) by the river Saint -Laurent, Quebec National Assembly building, the Museum of Art and the Museum of Civilization in Quebec are also famous works of this city. Located on the outskirts of the city, Montmorency Falls and Sainte-Anne-de-Beaupre church is attractive tourist destination in Québec.

All You Need To Know About Halifax

Acclaiming and Appreciating the Beauty of Canada!